1.Invisible being have been doing something very evil and abominable they have been using Humanity which is a Higher Intelligent Life form that is not a food into a food. Unaware of whats occurring because it is hidden from the eyes and senses of Humanity is what I believe to be invisible beings that are eating Humanity as a food. Based on my own personal experience there are beings on the planet and inside the Universe that are farming Humanity and eating us as a food. Some of these beings work for institutions that Humanity would never believe is farming and producing Humanity as a food. For example many Governments and Religions of the Human world on the planet Earth are working together with eaters of the dead corps of Humanity; but the dead corps of Humanity is not the only target of eaters of Humanity, but also the spirit and energy of Humanity is being eaten by invisible beings that the normal Human senses cannot detect unaided or unveiled or unless recoded, or unless a Human Being does not sleep for over 3, 5, 8, 10, 13, 15 or more days.

2.Many Humans turned to godly beings for protection when in reality there are many evil godly beings that see Humanity as a food source and are eating Human Beings as a food; not only are demons, devils, and aliens eating Human Beings as a food, but also certain evil godly beings that are cannibalistic against Human beings are also eating Human Beings as a food source. Human Beings are not only of the flesh and physical worlds, but also of the invisible spiritual world. In the spiritual world many evil things are trying to eat Higher Intelligent life forms such as Humans as a food. These eaters of Humans include universal entities; dimensional entities; space entities; galaxies dwelling entities; world matrix entities; planetary spirit entities; evil nature spirits; evil spirits that dwell in heavenly bodies such as stars, suns, moons, and planets; beings that dwell in everything and become anything; evil transformers and transmutators; evil beings that create reality systems to collect food out of reality systems, realitors, and inhabitants of realities; entities that live in the stomach of Humans to eat their sustenance and to eat the Human Being eventually as a food; dark entities; spiritual beings; evil light entities; aliens; greys; reptilians; syrian dogs head creatures; gods; demigods; angels; demons; devils; spirits and beings that eat Humans in their dreams while they are sleeping; entities that use necrophilia munging by luring a Human into sex just so they can eat the Human; beast mode creatures; animal heads; animals; animal spirits, and other spirits that dwell in animals; giant entities, and microscopic entities; cloud masses and beings that dwell in the sky above Humanity and in the Ground below Humanity; evil shadows; astral beings; evil ethereal beings; living plants; germ entities, disease entities; genetic programming entities; ener-mies which are beings that exists inside of Humans to torture them, eat them and kill them; evil machines; evil beings found in home walls and home furniture and electronics; elements such as stones, fires, airs, and water; evil higher beings and entities; evil secret society members; and even fellow cannibalistic humans, and cannibalistic evil human spirits that are evil enough to eat a fellow Human Beings as food are eating Human Beings as a food secretly and publicly. Humanity must not tolerate any race or thing to eat Human Beings including fellow Human beings that are cannibals must be stopped and brought to Justice or killed from existences as a predator against Human Beings.

4.Many times religions are a food processing plant to sell Human Beings to hell system which are other reality systems where they eat Human Beings while torturing them. For example I always felt like hell fire is another way to process Human Beings as an energy source in the most evil tormenting manner. Many hell systems that was design by some of the religions of the planet Earth profess or confess to believers that they will literally get a sinner or person who have karma eaten as a food. Many times gods and authorities of religions behave as shepherds leading flocks of sheep to the slaughter they pretend to be a friend just like a farmer pretend to be a friend of cows and other livestock that they sell and eat; like farmers leading farm animals, gods and authorities of certain governments and religions protect Humanity for a short while until it is times to harvest and cull Humanity as a food for their kind then they secretly kill Humans that they lead and turn them into a food for their kind on Earth and in invisible reality systems vibrating in the same environment as Humanity or in alien planets that come to the planet to collect Human beings as a food. Humanity must find out every detail of such eaters of Humanity and bring them to justice for eating Higher Intelligent Lifeforms which are Human Beings. 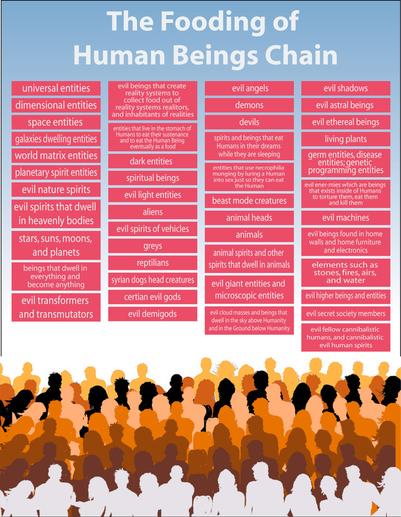