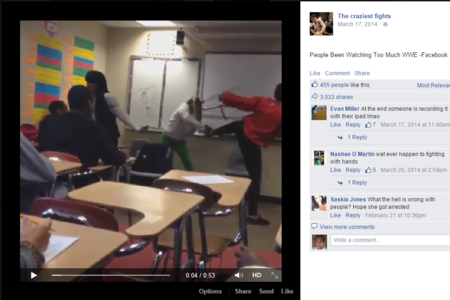 There is an increase in illegal fights in the community especially in the Black/Afro-Genetic community there is obviously a rise in disorderly illegal fights especially broadcasted on facebook.com, mediatakeout.com, and www.worldstarhiphop.com, youtube.com, and other websites.

These fights display many different types of fights such as same racial fight, different racial fights, different color fights and many more fights. These fights display male vs males, females vs females, males vs females, young vs old. Some of these fights are group fights involving several people fighting to large groups fighting each other, to chaotic disorderly fights. There is also a rise in riots in the community and I also noticed that police officers are also quick on the trigger to shoot suspects in police stops.

I noticed that the physical world do have violence in it and secret malice such as secret societies of cannibals that secretly prey upon Humanity, but such cannibalistic societies must be hunted down and killed by Humanity. Humanity should prefer to let a Human Body rot, before letting anyone eat it; furthermore Humanity should seek to preserve dead Human bodies with advanced technologies instead of letting them decay.

Getting back to the main idea of this article is that there is an increase in illegal fights in the spiritual and physical realm and I especially noticed that the illegal fights are especially being broadcasted on facebook.com, www.worldstarhiphop.com, and mediatakeout.com, and also on youtube.com.